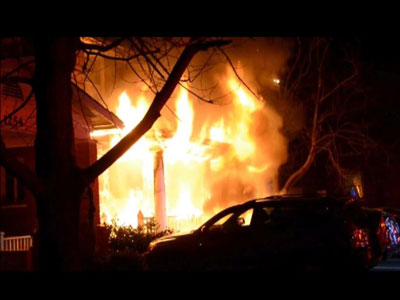 At 5:00 a.m. on January 21, 2013 a major house fire occurred in a popular residential area mainly inhabited by UVA students. The fire occurred on the front porch of a house on Wertland Street, home to 13 UVA students, 11 which were home and asleep at the time of the fire. Sanitation workers on their morning rounds spotted the flames. Immediately they start yelling and throwing rocks at the windows to wake everyone. Indoors, groggy students wake up and start scrambling to get out, only to find flames from a burning couch blocking the front door. The students race to the only other exit – in the back, through a bedroom, where the door is closed, but fortunately not locked. In that bedroom, the students struggle to wake up the sleeping occupant: yelling, shaking him, and pulling him out. Finally outside, they watch as their house, belongings, and several cars are destroyed. In a daze, they recognize they were lucky: this episode could have had a very different and tragic ending.

Below you can watch video of the actual fire and listen to the 911-call. The video also contains inerviews of students describing what it was like to exit a burning house, and an interview with the Deputy Fire Chief describing the harrowing event.

Service Satisfaction Survey
Please complete this brief survey and give us your opinion about the services the Environmental Health & Safety (EHS) has provided to you. All completed surveys are sent to the Director of EHS.